WAM hold their social and committee nights on the first Tuesday every month at 8.00pm at :

Select map for location and directions

Wishing you happy and safe riding ! 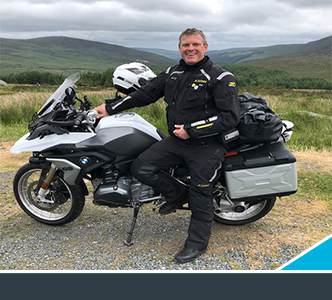 Unlike many of my friends and colleagues I was late entering the biking world. I passed my direct access test in early 2001 while in my mid 30’s and consequently rushed out to buy my first bike. The bike in question was a stealth black Suzuki 750 GSXF affectionately known as the baboons bottom in reference to the cone shaped rear light cluster. It still brings a smile to my face when I see the same model of bike on the road today. For the next 10 years I’ve had a plethora of different styles of bike including Kawasaki 600 & 636 ninja’s, a Suzuki Hayabusa and a selection of the smaller capacity BMW models. I then transitioned onto the infamous R1200 GS. Presently I ride the latest incarnation the mighty R1250 GS. Up to then I had only ridden road going bikes and it was in 2010 that my biking style changed direction.

In 2011 I booked a trip to ride 2000km from Phnom Penh to Siem Reap in Cambodia, 90% being Off Road. It was titled Tomb Raiders and if you think of Laura Croft it did not disappoint. The chance to ride through Cambodian jungles and sleep under the stars in 4000-year-old temples. Among the participants were a couple of Dakar riders so to say it was a baptism of fire was an understatement, but what an adventure. Over the last 10 years subsequently I have been extremely fortunate to have had the chance to ride some of the most beautiful parts of Southeast Asia. Thailand’s famous Mae Hong Son Loop with its infamous 1860 consecutive bends. Crossing the mighty Mekong River and the bridge over the river Kwai in Kanchanaburi. Riding through Myanmar and actually getting to sleep (for one night only) in the actual hotel room that Richard Hammond used in the Top Gear Burma special edition. The last adventure been in 2020, riding the full length of Vietnam from Hanoi in the north following parts of the Ho Chi Minh Trail all the way down to Saigon in the south. It was back in 2016 at motorcycle live at the NEC in Birmingham where a chance conversation with volunteers promoting the National Association Blood Bikes started me on my quest to improve both my safety and enjoyment of motorcycling. I signed up there and then with the IAM and in turn joined Wolverhampton Advanced Motorcycle. Through their dedicated volunteer training team of observers, I pass my advanced test in September 2017 and joined the training team 12 months later after passing my IMI observers qualification. I have also completed my advanced car test obtaining a f1rst in February 2019. Being a member of WAM has allowed me to re-energise my riding and I’ve had the chance to explore a little closer to home some of the best biking roads the world has to offer. Some being the West Atlantic Way in Ireland, a 2200-mile trip around Scotland taking in some of the famous NC 500 and John O’Groats. Together with regular visits to enjoy the endless tarmac of Wales. In December 2021 I had the prestigious honour I’ve been voted onto the WAM committee in the position of Group Chairman. The duties that I hope I can carry out with pride and passion for advanced motorcycling and promoting road safety and enjoyment for all. 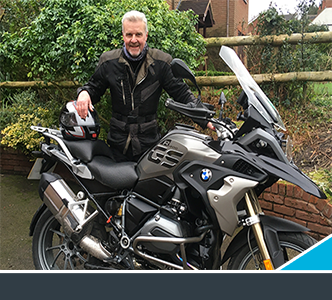 I started riding motorcycles at the age of 16 years old, on a Yamaha FS1E and still wish I had that bike now! The sense of freedom and exhilaration it gave me at that time, even at 36 mph, has never left me. I’ve owned various bikes over the years of different makes and sizes, including classics. But there was a time when my riding became intermittent due to work, mortgage and children!

Some years later, I decided I needed some extra guidance and practice from experienced professional riders, so I joined WAM in 2017. I quickly realised there was so much more to learn and thankfully, given the chance to improve my riding skills. I am now a volunteer blood biker, a qualified IAM local observer, ready and keen to pass on the knowledge and skills to new members 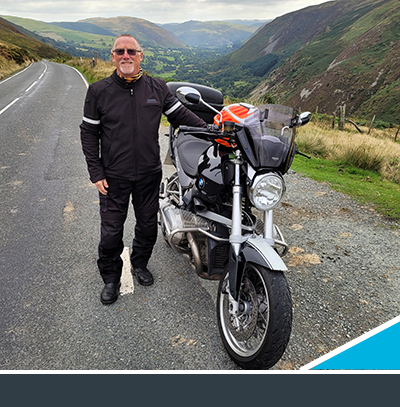 I Passed my test at the second attempt in the October, that’s the one where the examiner walked around the route and the emergency stop was him jumping out from behind a tree. Not sure if he realised you could see him from a few hundred yards away, he had the biggest trilby hat I’ve ever seen. Despite that I ran over his toe, don’t ask.

Anyway, I rode that bike to death for a couple of years before moving on to a BSA B40 350cc which I kept for 4 years. After that I drifted away from biking for some reason, which of course I now regret.

I returned to my senses in 2014 and returned to biking inspired by my buddies who have ridden for years and they helped me out loads to begin with.

I purchased a Suzuki Bandit 600cc which I rode around on for 6 months before discovering my bike licence had lapsed. I fell foul of the digitisation of licences in 1976 when a lot of old paper license records were lost. So I had to pass my test again which I did in 2015.

I retired in 2017 and did as much riding as I could with my buddies, even got a trip to Ypres under my belt. Then in 2019 I signed on to IAM with the desire to improve my riding and the opportunity to do some group riding.

It was a bit of a baptism of fire, realising how much I needed to improve. Anyway, my training got underway and I remember my first full group ride out, mainly for the fact that it bonked down all day which made the riding hard. I have to admit I struggled a bit and at the end of the ride my observer told me I’d done pretty well for my first time and I’d ridden my Bandit like I’d stolen it. Thanks Lee.

A few months later I decided to change bike to a BMW r1200r. I had plans for 2020 to troll round Europe for 10 days as a present to myself for my 70th birthday. But covid put paid to that. But there’s always next year.

I finally passed my advanced test last April much to the relief of my wonderful observer Lee Spindler who I can’t thank enough. And I took up the position of associate controller as I wanted to give something back to the group and the wonderful people who are members of it and all the help and advice I’ve received. 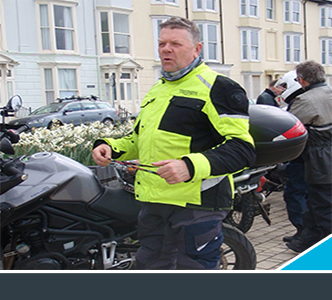 I started riding in 1977 aged 16, 50cc Garelli tiger cross, no training just my dad showing me the controls and “off you go”. Following year progressed to 250s and then passed my test in 1981, I have owned numerous bikes, mainly for commuting to start with and didn’t get serious till the late 90s.
I joined the IAM at the bike show in 2007 and started my training the following spring, passed my test a couple of months later, then progressed to observer, national observer and local observer assessor. Became treasurer in 2017.
I currently own a couple of Triumphs and most of a 1984 GPZ550 I am tinkering with.
I try to get involved as much as possible and enjoy all the aspects of the club, group rides and activities along with our social events.
Best of all I have made many new friends who all have the same passion for motorcycles. 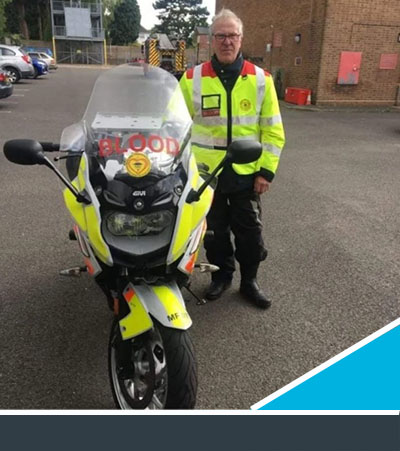 Started riding on my 16th birthday April 1969. Quickly passed my test and progressed to riding a Triumph Bonneville 2 Years later. Had many bikes over the years, then in 2017 enrolled with IAM and joined WAM. Having passed my advanced test I have joined Midland Freewheelers (Blood Bikes}. In 2022 I became Secretary of WAM. I presently have 4 bikes ranging from a 1967 Suzuki to a 2016 Honda Crossrunner 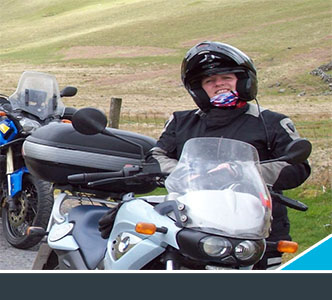 I firstly became interested in Motorbikes when I was 15yrs old. I had a lift home from and 18yr old Eddie Cochrane, no not the Eddie Cochrane although would have been much more exciting. He was a friend; he and came to my rescue one evening with his Red Suzuki GT 250.

Over the years I have continued to have an interest in Motorbikes and travelled several times as a pillion. I started learning to ride in 2010 and passed my test on a Kawasaki GPZ 500 and I now ride a BMW F650 CS.

I am a member of FJ owners club and attend club runs, and with my partner organise Motorbike Holidays to Scotland and Europe.

My goal is to continue to attend as many club runs and holidays to Scotland and Europe as possible. However, ultimately, I want to return to Switzerland compete the to the Furka Pass again. 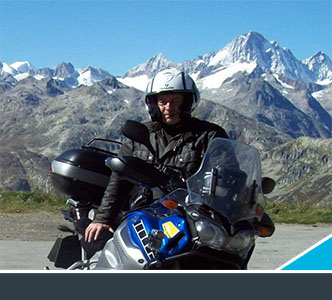 I have been riding since I was around 10yrs old, first bike was purple Puch Maxi. I passed my test a few weeks after turning 17, on a Yamaha rs100 which I still own. Since then, I have been riding various makes and models of bikes.
I have travelled around Europe and currently ride about 25000 miles year.
I joined the IAM in 2009 and have progressed through the training to become a National Observer and Local Observer
Assessor. I was previously a member of RoSPA and achieved their gold award.
I enjoy trail riding and regularly lead rides for the local TRF group on green lanes.
I regularly lead club runs and British / European tours for both WAM and the Fj owners club of which I am also a member. I started riding bikes as soon as I was 17 on the Honda H100A (first water cooled Honda), I always intended in extending my understanding of riding motorcycles, but life took over and 27 years later I decided to take my motorcycle test. I passed September 2017 and immediately looked for what advanced courses were available.

During winter of 2017 I started my advanced journey by signing up with IAM Roadsmart (through the WAM group) and also with RoSPA – West Midlands Group).

I passed both tests during the Summer of 2018 and achieved a Gold Standard pass with RoSPA, wanting to still take my understanding and skill of advanced riding further I signed up with the Masters programme with IAM Roadsmart. The Masters programme test required me to travel to Weston Super Mare for the test and I passed, achieving a Masters (Distinction).

The obvious next step for me was to become an observer for an advanced group, so I again, signed up with IAM and RoSPA on the observer training programmes. I passed my IAM observer test during 2019 and have found it very rewarding passing the knowledge I have gained onto new associates.